Posted on February 12, 2018 by readinghistory

by Tom Rusbridge, University of Birmingham 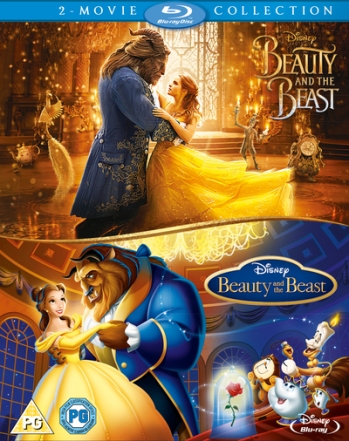 The two modern films’ adaptations of the characters on a 2017 Beauty and the Beast 2-Movie Collection (accessed 8th January 2018).

Disney’s live-action remake of ‘Beauty and the Beast’ was released in Spring 2017 and made its little-screen debut over Christmas. Following on from the animated feature classic of 1991, the fantastical nature of the film’s object-based cast should be interesting to historians as characters such as Lumiere, Cogsworth and Mrs. Potts readily lend themselves to a long history of human relationships with objects and their agency; a significant and widely contested debate among historians, archaeologists, sociologists and anthropologists alike working on material culture.

The film did not originate with Disney in 1991, however, nor indeed in the English language. Terri Windling has laid out the roots of this popular story – the origins of which lie in France’s eighteenth-century literary sphere, first published as ‘La Belle et la Bête’ by Madame Gabrielle–Suzanne de Villeneuve in 1740. [1]  Eighteenth-century France, indeed, provides a very recognizable context for Belle’s provincial town of the film adaptations, complete with bustling market squares, leaning farmhouses and a backdrop of green pastures. This story did not become translated into English until the nineteenth century, in which the story enjoyed a variety of adaptations in a range of types of text. On the one hand, a number of versions of Beauty and the Beast existed as richly illustrated children’s fairy tales across the nineteenth-century and as late as 1921, while on the other the story was transformed to rhyme by Charles Lamb in 1811.[2]

In some versions, such as that printed by Samuel and John Keys in 1840, Beauty – the typical English translation for Belle and name of the protagonist in most nineteenth-century translations – has brothers. In others, the Beast has human servants.[3]  Despite minor changes to secondary characters or the setting of the action, there is a basic and consistent storyline in which Beauty’s father – a failed and destitute merchant – is captured by Beast for stealing a rose and released in exchange for his daughter. Beauty, at first scared and displeased by her stay in Beast’s castle gradually falls for a creature who is ‘rough outside with a gentle heart’. In nineteenth-century English adaptations the story’s climax varies. Beauty, seeing her father’s struggle through the prism of a magic mirror, longs to return home, yet once having done so she returns again to the castle too late to a dying Beast. In some versions the Beast dies, in some he lives on as a Beast, and in others – notably, those geared towards children – he transforms into a prince and marries Beauty. As one author, Felix Summerly, wrote of the story in 1845: ‘Versions of this tale under very different shapes are met with throughout all Europe. Sweden, Italy, France, Germany, have all their ‘Beauties and Beasts […] Every age modifies the traditions it receives from its predecessor, and hands them down to succeeding ages in an altered form, rarely with advantage to the traditions themselves’.[4]

Beauty and Beast as represented through one Victorian example. Felix Summerly, The Traditional Faery Tales: of Little Red Riding Hood, Beauty and the Beast & Jack and the Beanstalk (London, 1845) Plates 1 and 2.

There are therefore both some important differences and important similarities between the on-screen adaptations the ‘90s generation grew up with, and its antecedence in nineteenth-century literature. For the former, the differences in the story arc are quite pronounced, but for the latter the central message of loving someone for their heart, and not their outward appearance, rings true. One sizeable difference between these two representations of the same story – film and text – is in the cast of singing and dancing objects which make the films so memorable. Looking at those versions with a Dramatis Personae, such as ‘Beauty and the Beast: A Fairy Extravaganza in two parts’ by J.R. Planché, there is not only no mention of characters that approximate to the on-screen identities of objects, but no reference to object-characters at all.[5] But does this mean that the objects, which were so central both to the viewer’s enjoyment and to Belle’s experience of the film, were absent figures in its literary origins?

Both Beauty and Beast on display on the cover of a version at the turn of the twentieth century. Walter Crane Publishers, Beauty and the Beast (London and New York, 1900).

While it is true to say that there were no object characters in the various versions of the story historically, these texts do allude to silent but active objects to generate an attitude of mystery and intrigue. They metaphorically imbue objects with human qualities and ascribe terms of action to otherwise inanimate objects. At the earliest, the 1874 Routledge edition features references to active objects upon Beauty’s arrival at the Beast’s castle. First, that the doors to her abode ‘opened themselves’, and second an inscription that ‘Beauty is Queen here: all things will obey her’.[6] In 1881 a different adaptation states upon Beauty’s arrival to dinner that ‘the table was laid ready for her, and a sweet concert of music played all the time she was dining, without her seeing anybody’.[7] The same sensation is reported in the dinner scene in a 1921 version, and again in another 1921 collection of stories, where Beauty ‘enjoyed an excellent concert, though the performers were invisible’.[8] It is the second version – within ‘The Blue Fairy Book’ – which gives the closest approximation to the cast of singing and dancing objects with which Beauty and the Beast is today so readily equated. Here, not only did Beauty ‘find her supper served at just the time she preferred to have it, but she did not see anyone or hear a sound’, but ‘wax candles in diamond and ruby candlesticks were beginning to light themselves in every room’ and – most significantly –Beauty ‘sat down in one of the chairs, when instantly the curtain was rolled aside and a most amusing pantomime was acted before her; there were dances, and coloured lights, and music, and pretty dresses’.[9]

Beauty sat down to dinner with the Beast. Illustration by Anne Anderson (1874-1931) via Wikimedia (last accessed 5th January 2018).

The objects of the Beast’s castle – candles, instruments, curtains – do not, in the original forms of storytelling display agency as do Lumiere and Cogsworth. While the agency of these objects in the films is translated into these objects expressing themselves and their personalities energetically, with the exception of Beauty’s private pantomime nineteenth-century storybooks pay great attention to the silent agency of objects. The candles do not light themselves with great flourish and razzmatazz, but quietly and sedately. Working towards a close, therefore, this comparison lends itself to helping historians understand shifting popular notions of ‘agency’ and differences between ways in which agency is conceptualized in current-day thinking and in the contemporary literary climate of earlier modern culture and society.

Today, ‘agency’ conjures up ideas of volition, animism and independent action or thought – all readily recognizable and visible qualities, while for the eighteenth century of Madame de Villeneuve and the long nineteenth century of her successors, objects had stories to tell and did so through ‘it-narratives’, or ‘novels of circulation’; stories which emblematized their silent-yet-active nature. In such stories as The Adventures of a Black Coat, Dialogue between the Pulpit and Reading-Desk and The Adventures of a Bank-Note, of 1760, 1767 and 1771 respectively, objects expressed their stories, histories and feelings within a private discourse that was understood to be both separate and silent to humans.[10] That objects were granted a genre in which they possessed conscious thought is perhaps best exemplified by the opening sentiments of ‘The Adventures of a Doll’, dated 1816:

‘In a large shop, in the great metropolis of the British empire, I first opened my eyes on the changeful scene of life; and as the days of youthful beauty and vanity are now over, I may be allowed to describe, for the amusement of my readers, the charms which so long attracted the attention of every youthful passenger’.[11]

The agency of objects in Beauty’s original steps through Beast’s palace did not express itself through the same gleeful exuberance of Disney’s modern characters therefore, but a silent and private action which tallies neatly with the internalized consciousness certain authors imbued objects with through it-narratives. This may not be the kind of agency some scholars strive to establish, but human-centred and creatively established forms of agency were nevertheless still present, and should be appreciated. In sum, two artistic expressions of the same story communicate through their representation of objects contemporary understandings of ‘agency’. Indeed, if the agency of Beast’s objects is not a tale as old as time, this brief discussion of the origins of a famous tale can add at least 250 years to the clock.

Rhyming prose introduces Beauty in an 1811 example of the story. Charles Lamb, Beauty and the Beast, or, A Rough Outside with a Gentle Heart (London, 1811) p. 31.