Posted on December 16, 2019 by readinghistory

In 2018, Dr James P. Bowen of Leeds Trinity University was awarded the Poultry Club of Great Britain Research Fellowship at the University of Reading’s Museum of English Rural Life.

‘The Twelve Days of Christmas’ is a popular Christmas carol sung throughout the country. It is an example of a cumulative song (a form often used for children’s songs) whereby increasingly luxurious gifts are given on each of the twelve days of Christmas. It refers to the traditional celebrations which began on Boxing Day and finished on the Feast of the Epiphany (6th January). Originally it was probably a children’s memory or forfeit game. Today it is sung ‘Twelve Drummers Drumming, Eleven Pipers Piping, Ten Lords a Leaping, Nine Ladies Dancing, Eight Maids a Milking, Seven Swans a Swimming, Six Geese a Laying, Five Golden Rings, Four Calling Birds, Three French Hens, Two Turtle Doves and a Partridge in a Pear Tree’. However looking back, it is apparent that the lyrics of the carol for the fourth day have not always been the familiar ‘four calling birds’ we sing about today. In the past the order of the verses and specific gifts has varied and there are versions from England, France, America and Canada. 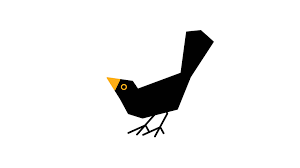 [Image credit: The blackbird behind The MERL logo, as designed by Thomas Manns & Company.]

In Mirth without Mischief a collection of children’s games published in London in 1780, which includes the first recorded instance of The Twelve Days of Christmas, on the fourth day four ‘Colly birds’ were given. Joseph Wright’s (1855-1930) English Dialect Dictionary first published in 1898 includes an entry for ‘Coll[e]y’ found in Gloucestershire, Somersetshire and Devon defined as ‘The blackbird, Turdus merula. Also known as Colley-bird.’ This Latin name, merula, gave rise to the French ‘merle’ and Scots ‘merl’, which just happens to be why the hosts of my recent Poultry Club Research Fellowship, The MERL (Museum of English Rural Life), chose a blackbird as their symbol. ‘Colly birds’ is given in a subsequent version of the song, published as a broadsheet in Newcastle-upon-Tyne between 1774 and 1825. In his The Nursery Rhymes of England which James Orchard Halliwell (1820-89) published in 1842, it had changed to four ‘canary birds’ which was subsequently used by Edward F. Rimbault’s (1816-76), Nursery Rhymes, with the Tunes to Which They Are Still Sung in the Nurseries of England. However, it appears to have reverted back to ‘colly’, ‘collie’ and ‘colley’ birds in versions published in 1853, 1855, 1858 and 1864.

[Image credit: Detail of a page from an eighteenth-century workbook by Richard Beale.]

In a short story called ‘The Ashen Fagot’ published in 1864, Thomas Hughes (1822-96) wrote that on ‘The fourth day of Christmas my true love sent to me four ducks quacking…’,  although this seems to have been an exception with later versions reverting to ‘Colly’, ‘Colley’, ‘colour’d’, ‘coloured’ or even ‘corley’ birds. It was Frederic Austin (1872-1952) who in 1909 introduced the now standard melody and altered the fourth day’s gift to ‘four calling birds’. This has become the most popular version sung. In the past there was considerable variation in the type of bird denoted on the fourth day. Calling birds imply a variety of song birds that produce an attractive pleasant melody commonly sung in the spring by the male as a prelude to the breeding season, whereas colly bird refers to blackbirds of which the male’s song is a varied and melodious low-pitched fluted warble. Furthermore the four calling birds were deemed to represent the four canonical gospels of Matthew, Mark, Luke and John which begin the New Testament of the Bible, reflecting the prevailing Christian religion of the period. 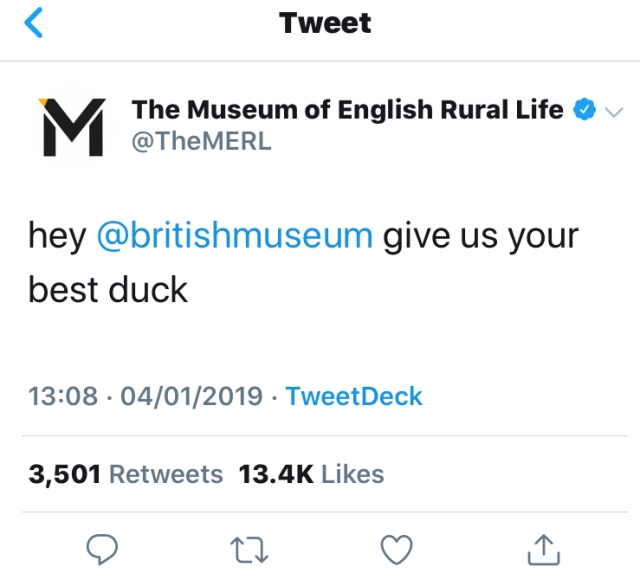 In recent years The MERL has itself fuelled the popularity of several birds alongside its ‘merly’ mascot, including a now infamous chicken in trousers, some of the world’s best ducks (Thomas Hughes would approve!), and some artist-inspired poultry in its own backyard. So, on this fourth day we give you four very strange calling birds, a blackbird logo, an eighteenth-century hen doodle, a duck on twitter, and a chicken that lives in a museum garden.

[Image credit: The Chook Run henhouse in The MERL garden, as  designed by artist Christine Mackey.]