Posted on April 7, 2020 by readinghistory

In the first of our guest blogs we hear from our Research Dean for Prosperity and Resilience and Chair in the History of Finance at the ICMA Centre, Henley Business School Professor Adrian R Bell. 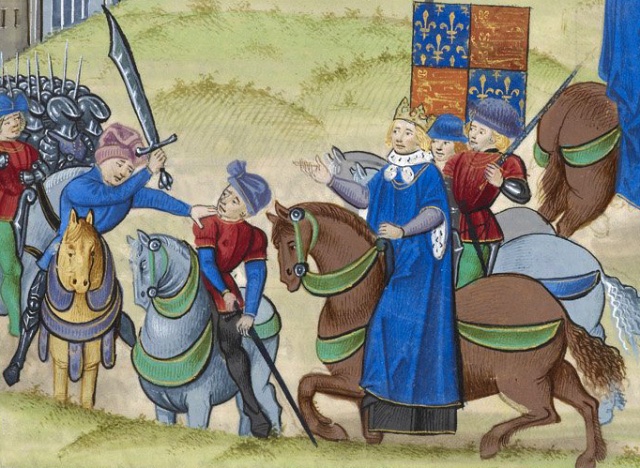 In this edition, we reveal to the world the long-lost mix tape of everyone’s favourite rebel Watt Tyler. It is said that this tape was played to his band of followers immediately prior to the meeting with Richard II at Smithfield on 15 June 1381. Unfortunately for the rebels, Tyler was slain and the mix tape was hidden and has only recently been rediscovered. So do listen, but be careful, as it could inspire dissent…..

If you want to read some new factual accounts of The People of 1381, then do pop over  1381 Online

There will be swearing in the following songs, but then they are songs about rebellion.

1. The Sex Pistols, ‘God Save the Queen’
Yes obvious, but has a country ever been more frightened by a pop song? In 1977 it nearly brought the UK to a standstill caused by disbelief in the disrespect.

2. Sonic Youth, ‘Teenage Riot’
Always rebelling (especially against their age, were they ever youth?) and still going strong as solo artists – see Kim Gordon’s recent set for 6music for instance (https://www.bbc.co.uk/programmes/m000g5fq). This song is from 1988 and it is still fresh. Don’t play it too loud.

3. David Bowie, ‘Rebel Rebel’
This was controversial for the peasants as they could not work out which side The Thin White Duke was on. This performance is from 1974 and it looks rebellious to me.

4. Billy Idol, ‘Rebel Yell’.
From 1983 and Billy has kept the look ever since and it still works.

Not an obvious rebel song, but I couldn’t do a Desert Island list without a Fall song. This one from 1980. For those not old enough to remember, the rates were replaced by a poll tax and led to a second poll tax rebellion on 31 March 1990. Mark E Smith, 10 years ahead of his time…

6. Joy Division, ‘Disorder’
From 1979, a good beat and sentiment – sure to get a rebel group in the right frame of mind, especially the unhinged ending.

7. Mercury Rev, ‘Holes’
For some much-needed calm, and from the album Deserter’s Songs – this was one for all the soldiers who had just returned from France in service of the King and had immediately joined the rebellion.

8. Comet Gain, ‘We are all fucking morons’.
Almost contemporary (2019) and perhaps more relevant for today – but was the final song and really got the crowd going crazy. This one was originally recommended by Professor Matt… so Watt can’t take all the blame for his final choice.

For his book, Watt would like to take the latest bestseller by Geoffrey Chaucer, The Canterbury Tales. It is hard to get a copy, as they are artisan produced, hand written and individually illustrated. Watt has so far only been able to listen to the prologue being read out a few times, but he liked what he had heard so far.

For his luxury item, Watt would like a quill, ink and parchment. He wants to keep working on the rebel’s charter, especially the abolition of serfdom bit.