Posted on September 23, 2013 by readinghistory

I grew up in south-east London and my education was determined by railway stations between Orpington and Victoria. I travelled a lot in Italy in my teens, and when I went to study history at Oxford I did quite a lot of assignments on Italian topics such as Dante and medieval Florence, the Risorgimento and Mussolini. After a year teaching in Italy, I came back to Oxford to do a doctorate on the campaign conducted by the fascist regime against the Sicilian mafia in the 1920s. That meant quite a lot of work in Sicily itself – not easy and at times quite tricky (families keen to stop you publishing unwelcome things about their forebears etc). I was very lucky to have an exceptionally good supervisor, Denis Mack Smith (whom I still see, though he is now in his 90s). I had a couple of fellowships in Oxford before coming to Reading in 1987.

My research has remained with modern Italy, and I’ve published a number of books over the years on aspects of the 19th and 20th century. All my books have been translated into Italian and I’ve been given the rather grand-sounding title of Commendatore by the President of Italy. My most recent books are a history of Italy from the French Revolution to the present (The Force of Destiny. A History of Italy since 1796, Allen Lane, London 2007) – which has as its main theme the attempts made by Italians to turn what Metternich famously dismissed as a ‘geographical expression’ into a unified nation-state) – and a study of the fascist period as seen through contemporary diaries and letter (Fascist Voices. An Intimate History of Mussolini’s Italy, Bodley Head 2012). This last book has won a couple of prizes, including the Wolfson History Prize for 2013. I’m aiming now to do a book exploring the legacies of fascism to post war Italy. This is something that needs to be tackled, not least because we need to start explaining the appeal of Silvio Berlusconi in Italy over the last twenty years. 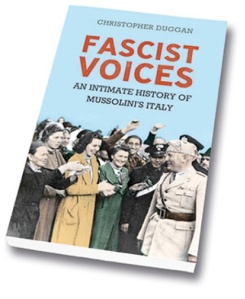 For a number of years I was Head of the School of Literature and Languages, before moving to the History Department in 2013. In addition to working with my many PhD students, I am planning to develop a Centre for Modern Italian History. I work quite a lot with the media in both the UK and Italy and help to make radio and television programmes about Italian history.

In my teens I had a real passion for medieval history and spent a lot of time travelling the country visiting churches. One of my hobbies was brasses and brass rubbing – something that still fascinates me (I’m a member of the Monumental Brass Society). Contemporary fiction, cinema, opera and travel are among my other interests.