The atomic bomb and public opinion: The limited credibility of NATO’s deterrent strategy during the Cold War

Posted on February 15, 2015 by readinghistory

In this week’s post of our Hiroshima 1945-2015 series, Dr Linda Risso discusses NATO and nuclear deterrence… 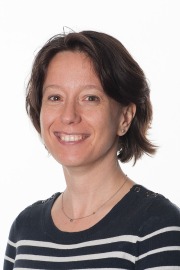 The bomb. The mushroom cloud. The images of flattened Hiroshima and Nagasaki. The shadows of victims permanently etched in the walls. The harrowing photographs of burned bodies and carbonised objects. Since August 1945, it has been impossible to forget the horror of the atomic bomb. The images are imprinted indelibly into the public’s mind, forever.

Throughout the Cold War, vocal pacifist, neutralist and anti-nuclear movements opposed rearmament, military escalation, deterrence and mutual annihilation. There was fear that nuclear weapons may be misused, that the intention of the adversary may be misinterpreted and that in the end atomic and thermonuclear bombs may lead to the accidental annihilation of the human race, so brilliantly portrayed by Kubrick’s Dr Strangelove (1964).

During the Cold War, NATO struggled to portray itself as a political alliance designed to promote peace and stability. Since its early years, international communism portrayed the alliance as the key reason that kept Europe divided. They claimed that NATO made a war with the East all the more probable and that it drained national resources in the name of common defence and rearmament. The alliance was seen by many – not only communists – as a tool of American imperialism and its military bases as tangible signs of the Western European governments’ inability to protect national sovereignty, let alone national interests.

The student and workers movements of the late 1960s brought about a new wave of protests against the establishment, the older generation of politicians and the logic of the Cold War as a whole. This opened up the political discourse about peace, stability and international cooperation by bringing new ideas to the table, including the beginning of a new environmental consciousness. By the 1970s the peace movements had gained considerable momentum and became important political actors. Contrary to what had happen in the previous decades, in the 1970s the peace movements were independent and separated from communism. In fact, they criticised the communist regimes as much as the Western governments for their lack of commitment to peace and international dialogue and for the economic, political and environmental consequences of the proliferation of nuclear weapons.

New military technologies posed new questions about military strategy as well as about ethical implications linked to their use and were at the centre of a lively public debate that went beyond the strictly defined communist circles. By the early 1980s, pacifism and neutralism were on the rise on both sides of the Atlantic. The West’s commitment to arms control and diplomatic dialogue was therefore an essential precondition for public support. 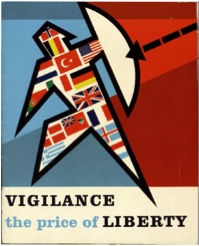 Vigilance: The price of liberty. Pamphlet printed by Bosh, Utrecht, on behalf of the NATO Information Service, 1963

NATO and the national governments saw the peace movements as a sign of the deficit of credibility of their nuclear deterrent. In fact, it was increasingly unlikely that the public would ever support the use of nuclear weapons. This would in practice nullify the alliance’s deterrent potential as the Soviets knew that nuclear weapons could hardly be used in any actual military operation.

Gone were the days of a clear vision of the world in black and white in which NATO had simply to point to the number of Soviet divisions stationed in Eastern Europe to demonstrate the need for NATO and for rearmament of the West. The alliance had to demonstrate that the Western deterrent strategy should be geared to approaching technological parity with the Warsaw Pact so to be able to engage effectively in diplomatic talks for arms reduction. Until the reduction of all atomic weapons was agreed, the West could not show itself weak.

Ivan Steiger’s cartoon was originally printed in the Frankfurter Allgemeine Zeitung and was re-printed in the NATO Review, August 1984, 32/4.

The response of the alliance to the peace movements raises fundamental questions about security, disarmament and international cooperation. Based on documents from the North Atlantic Council, this paper examines the political debate within the alliance and how national governments desperately tried to square the circle: reassuring their public about the alliance’s commitment to disarmament and peaceful cooperation while introducing new costly weapons and carrying out ‘hard talks’ with the Soviets.

The alliance and its national government did so by renewing their efforts to explain to the public that NATO was primarily a political alliance, that in the Soviet bloc citizens were deprived of their basic rights and that precisely because the superpowers were engaged in armaments reduction talks, NATO had to be military strong and could not disarm unilaterally. NATO argued that the latter option, advocated by many peace movements, would in fact mean the end of the talks as the Soviet Union would be no longer under pressure to disarm as there was no way in which the West could exercise any pressure in this direction.

It was a complicated – if not rather unconvincing – dilemma to explain to the public. And in fact few were convinced. Despite a lot of time, money and resources devoted to the new information campaigns in the late 1970s and early 1980s, NATO and its member government seemed unable to do more than just preaching to the converted.

If you would like to know more, have a look at Dr Risso’s new book!

1 Response to The atomic bomb and public opinion: The limited credibility of NATO’s deterrent strategy during the Cold War