What causes eclipses, and what did people think about them in the past?

The English chronicler, William of Malmesbury, recorded an eclipse in 1140 like this: ‘There was an eclipse throughout England, and the darkness was so great that people at first thought the world was ending. Then they realised it was an eclipse, went out, and could see the stars in the sky. It was thought and said by many, not untruly, that the king would soon lose his power.’

This mingling of astronomical knowledge, shown in the ability to identify a solar eclipse, with fears of catastrophe and political turmoil is echoed in John of Worcester’s work: ‘in 1133 a darkness appeared in the sky throughout England. In some places it was only a little dark but in others candles were needed. … The sun looked like a new moon, though its shape constantly changed. Some said that this was an eclipse of the sun. If so, then the sun was at the Head of the Dragon and the moon at its Tail, or vice versa. … King Henry left England for Normandy, never to return alive.’

The novelty of this account is its introduction of the astronomical concept of the celestial dragon, whose head and tail mark the points on the orbits of the sun and moon at which eclipses can occur. These points, also known as lunar nodes, are opposite one another in the sky, and orbit in the same way as the planets. It was therefore easy to conceive of them as joined by a gigantic, virtual body  In spring the moon’s path crosses that of the sun at the ‘head of the dragon’, whilst the autumnal point is the ‘tail’. The theory of the relative positions of the planets and their orbits is illustrated in this 13th century astronomical illustration:

The concept was an ancient one, with the first references to the celestial dragon seeming to come from Babylonian astronomers. However there is some confusion as to whether the original concept was a scientific one, or whether it referred to a belief that a celestial dragon caused eclipses by swallowing the sun or the moon. This fear, always attributed to the superstitious and uneducated, is mentioned in the ancient world and again in the early middle ages. In 9th century Germany church reformers criticised peasants for firing arrows into the sky during lunar eclipses, apparently in an attempt to kill the monster which was consuming the moon.

Discussion of how accurately eclipses could be predicted, and what their political significance might be (if any) is recorded at the court of Charlemagne, who employed the best astronomers available – mostly trained in Ireland. However, when his son, the Emperor Louis, died shortly after observing an eclipse, writers linked the two events.

Similarly, the Anglo-Saxon Chronicle recorded 9th century eclipses in a way which suggested links with the traumatic Viking invasions: ‘879: A band of invaders gathered and established a base at Fulham; and in the same year the sun was eclipsed for one hour of the day.’

Meanwhile, the Babylonian astronomical idea of the dragon which marked the points in the celestial cycle at which eclipses could be expected had been taken up by Hindu, Greek and then Arab astronomers. It was mostly from the latter that it made its way into medieval European theory, with John of Worcester’s use of it being one of the earliest references outside specialist, scientific works.

It remained in scientific use in the sixteenth century; as this illustration created in 1540 for the Emperor Charles V shows: 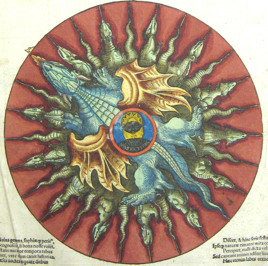 Image courtesy of the Astronomical Observatory, University of Vienna

A luxurious book like this cost the equivalent of several thousand pounds – but inexpensive Almanacs provided astronomical information and interpretation for everybody. These were published by rival compilers every year, and were so popular that they made their authors very rich – and raised large amounts of tax revenue for the government.

As this detail from Buckminster’s Almanac for 1598 shows, exact times for eclipses were given, together with interpretations. A partial solar eclipse was to take place at 2.20 on Saturday 25 February, with the sun in Pisces. This is predicted to cause ‘thick, cloudy, close weather, with rain … and stormy winds’, unhealthy for humans and animals, and likely to cause ‘swellings or tumours of the liver and spleen’ as well as mouth ulcers and eye infections.

2 Responses to What causes eclipses, and what did people think about them in the past?