Dr Turner  also discussed the Department of History’s link with Hiroshima in an interview for BBC South. Click below for full video

On 15th April 2011, the University of Reading received a remarkable and moving gift from the University of Hiroshima; a collection of roof tiles, collected from the riverbed near the hypocentre of atomic bomb blast of 6th August 1945. A little later we also received a full set of manga comics, the Barefoot Gen series, depicting a child’s eye view of the bomb. 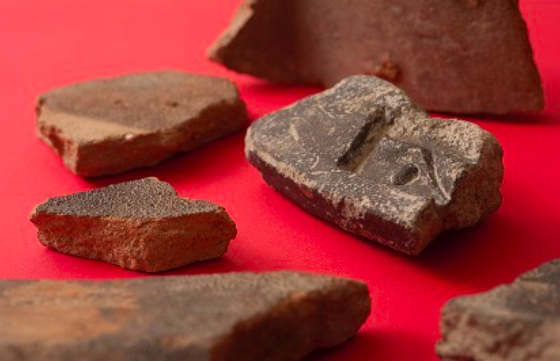 The University of Hiroshima was almost completely destroyed by the bomb, the buildings were demolished and the majority of students and staff died.  In the early 1950s, the University’s new president Tatsuo Morito reached out to universities world-wide to help support the re-establishment of the university by donating books for a peace library and seeds to bring the charred grounds back to life. 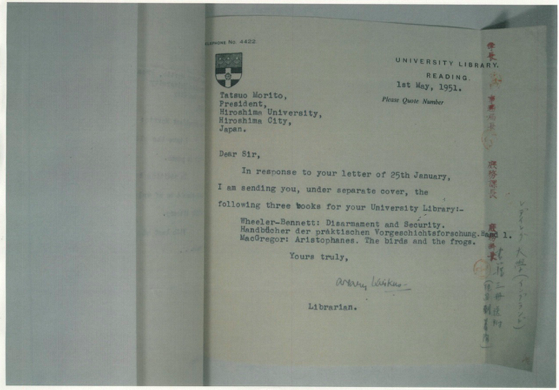 The request was for books or pamphlets that reflected what was ‘considered valuable by your university or of note in your country’ or books concerning ‘peace problems’. How the books were chosen is not entirely clear but three were sent by the Librarian, Mary Kirkus:

The University of Reading was inscribed on the donations in acknowledgment of the contribution and good will and remain in the peace library today.

The tiles were received in 2011 and sent to the then Vice Chancellor Professor Sir Gordon Marshall. In his letter of thanks for the tiles Professor Marshall said ‘Here at Reading, naturally we share your hopes for a more peaceful future for the world, and that nuclear weapons will never again be used on our planet.” The tiles had been collected from a riverbed near the hypocentre and were donated to the university in thanks and in the hope that the tiles would represent a world free of war and nuclear weapons.  They are a clear message of peace rather than simply of commemoration.  The tiles also came with a detailed radiation safety certificate and are now used by the Department for teaching and outreach.

The University of Hiroshima also donated ten volumes of early Japanese manga books – Barefoot Gen by  Keiji Nakazawa, first published in Japanese in 1974  Barefoot Gen was originally published in a series of magazines until circa 1985. Elements of the work are autobiographical and reflect Nakazawa’s 6 year old self and the experiences of his family. A complete set of books were donated after the translation of the last book into English in 2001. The comic strip format of the books is made more poignant by the fact that this is a child’s view of the bomb and a description of impact on his family. The books and their ‘comic strip’ format were not without controversy in Japan where several Education Areas chose to have them removed from school libraries because of their graphic nature.  The introduction to the first edition of the English translation was by author of Maus, Art Spiegelman.

One of the volumes in the Barefoot Gen series

The tiles and manga books are now a unique and emotional part of Special Collections:

“The day that the atomic bomb was dropped, August 6, 1945, all seven rivers in the city of Hiroshima were rushed by hordes of people whose bodies were severely burned and seriously injured.  They were washed away by the high tide at that time, and their bodies and blood filled those rivers. These bodies were carried away by the current, repeatedly bumping into one another, before they completely sank, after which time their skulls were exposed.  We heard that the pale glow of phosphorous released from the bodies, going up like smoke, was seen for many years after the war.  The roof tile was collected from the bed of one of these rivers. Thus it contains the souls of the people whose lives were very regretfully taken away by this tragedy.”   ”We believe that the tile will convey to its viewers the raging souls and mournful tears of those who died that way.” (Extracts from a letter from Hiroshima University, 2011).

In the week of the conference we received a letter of support from the Mayor of Hiroshima who asked us all “in response to the desire of all hibakusha* to continue to strive with us to eliminate the absolute evil of nuclear weapons and achieve a peaceful world” (MATSUI Kazumi, Mayor, The City of Hiroshima, February 9 2015). The Mayor of Reading, Councillor Tony Jones, also sent words of support and reminded us of the wider relationship between Reading and Hiroshima through their status as twinned towns.

*hibakusha – survivors of the bomb.

Like Loading...
This entry was posted in Hiroshima and tagged anniversary, atomic, bomb, HIROSHIMA, Nagasaki. Bookmark the permalink.