Posted on September 6, 2016 by readinghistory

In April 2015, Iran pledged to halt its nuclear programme in exchange for the lifting of economic sanctions. Washington had imposed this embargo on Tehran since the 1979 deposition of the pro-western Iranian monarchy. The agreement reached in Switzerland was doubtless significant. Economically, it brought a country with significant commercial potential out of the international wilderness. Politically meanwhile, it helped unite forces fighting against the so-called Islamic State. Current US President Barack Obama claimed the deal had made the world a ‘safer place’.[i] His Secretary of State, John Kerry, argued that the agreement reached with Iran helped to stabilise the Middle East, a region long fraught with tension.[ii]

Yet not everyone in the Democrat Party shares Obama and Kerry’s enthusiasm for the Iran deal. The former Secretary of State and current Democrat Presidential Nominee, Hilary Clinton, has expressed concern at the nature of the agreement. While agreeing to the deal in principle, she has chastised the White House for not obtaining more concessions from the Iranians. She has instead called for greater US scrutiny to ensure Tehran adheres to its pledges on nuclear cultivation.[iii] Recent press reports have accused the Iranian government of still enriching uranium, while also arresting and executing more opponents of the Islamic Republic than ever before.[iv] 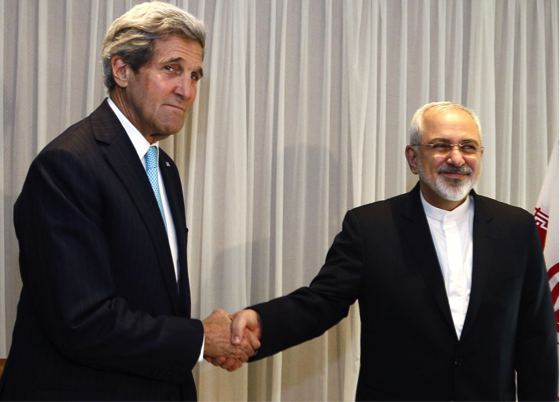 Agreeing to the deal: Secretary of State John Kerry with his Iranian counterpart, Javad Zarif.

Such scepticism towards Iran is not uncommon in the Democrat Party. John F. Kennedy was notably wary of close US-Iran ties, in direct contrast to other key actors in 1950s and 1960s American politics. As the Iranian Shah, Reza Pahlavi, was vehemently opposed to communism, many in the GOP and the State Department regarded ties with Iran as key to the Cold War in the Middle East. From 1953 onwards, the US provided the Iranian military with advanced weaponry and tactical training, while ignoring the Shah’s flagrant abuse of human rights and his authoritarian rule.

Within months of achieving office, Kennedy signalled his intention to shift the US approach towards Iran away from a policy of appeasement. This formed part of the JFK Administration’s wider ‘New Frontier’ stance to foreign affairs, where democracy promotion in developing countries was seen as key to winning the Cold War. A task force, comprised of National Security advisors McGeroge Bundy, Walt Rostow and Robert Komer, as well as Secretary of State Dean Rusk, was appointed by Kennedy to deal with Iran. In a May 1961 meeting, the task force offered the Shah US support on the condition that he streamline Iran’s armed forces, delegate government responsibilities and distribute land owned by nobles to peasants.

JFK and the Shah in the Iranian monarch’s palace, April 1962

However, the Kennedy Administration’s approach towards Iran was short lived. The Shah had grown suspicious of JFK’s motives. The Iranian monarch was convinced that through these reforms recommended by the task force the White House sought to replace him with an American stooge. In July 1962, the Shah began to tighten his control over Iranian governmental affairs. He sacked his pro-US Prime Minister, Ali Amini, and replaced him with his close confidante, Asadollah Alam. The Shah proceeded to outmanoeuvre the Kennedy Administration. In 1963, the Iranian monarch implemented a reform programme of his own called the ‘White Revolution’, which aimed to accelerate social and economic progress in Iran. Contrary to the series of reforms proposed by Kennedy’s task force, these did not intend to promote a more egalitarian Iranian society. Rather than being run by ordinary workers, key industries, such as agriculture and manufacturing, came under the control of the Shah’s acolytes.

Similarities can be drawn from Kennedy and Clinton’s stance towards Iran. Both have recognised the importance of US ties to the country to achieve the wider American foreign policy aim of geopolitical stability in the Middle East. Yet both Democrats feared that too much Iran-US collaboration would fail to lead to internal change in the Middle Eastern country. The lesson for Clinton – should she seek a middle way in the US approach towards Iran – is to look at the failings of Kennedy’s tactics and foster more of a rapport with her Iranian counterparts. That way, US foreign policy aims can be achieved in a region that is just as important to the American government today as it was over 50 years ago.

Like Loading...
This entry was posted in American History, Cold War History, News, US Election 2016 (blog posts). Bookmark the permalink.