The Long Read. Impressions of a Modern Pilgrim: Walking the Camino to Santiago de Compostela

Posted on January 13, 2017 by readinghistory

The droughte of March hath perced to the roote, …

When in April the sweet showers fall,

And pierce the drought of March to the root, and all…

Then people long to go on pilgrimages

Chaucer, ‘The Prologue’, The Canterbury Tales

It was not an April, but a September early morning, when the good pilgrims of Reading assembled at the shrine of St James in St. James Catholic Church near the abbey ruins where we are still looking for the body of Henry I which one day will make our town as famous as Leicester.  Unlike Chaucer’s pilgrims we were not off to Canterbury, but Santiago de Compostela.  Also, unlike our medieval predecessors, a coach stood ready outside the Church to take us to Stanstead airport.  Yet, doubtless as for many a pilgrim before us, the parish priest led us in prayer as we lit a candle before a modern shrine to a medieval saint. 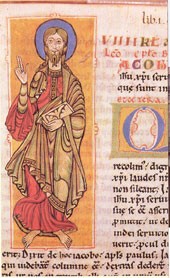 St James the Greater in the Codex Calixtinus, via Wikimedia

According to legend St James, the apostle and brother of St John, came to Spain to preach Christianity, but having returned to Jerusalem became one of the first Apostles to be beheaded by King Herod for his faith.  After his death James’s followers put his body into a rudderless boat which was carried by angels to the coast of north-western Spain where he was laid to rest.  Eight hundred years later his tomb was rediscovered and his relics authenticated.  The Catholic Church has always fostered devotion to relics of holy people as a way of coming close to God.  So began the tradition of pilgrimage to Compostela – which from the ninth century onwards increasingly rivalled the pilgrim sites of Rome and Jerusalem.

I was not exactly longing to go on pilgrimage.  But throughout the month of August I had packed and re-packed my newly-bought rucksack in preparation.  Its contents came courtesy of Cotswald Outdoor – the mountaineering shop whose staff I was delighted to discover knew more about the ins and outs of the Camino than many a medievalist.  Waterproof trousers, water bottle, sun glasses, head torch, blister packs, sun cream, ‘dry sacks’…, modern frivolous paraphernalia which would have puzzled and bemused, but no doubt also delighted, the medieval pilgrim.  Rain, sun and rough paths do not change much over the centuries.  My weight limit was 10kg but after a year of brain-work, not leg-work, I cautiously limited myself to 7kg.

I was curious to experience a modern take on medieval piety.  My knowledge of the Camino was derived from The Way starring Martin Sheen.  But like any medievalist worth their salt I had also read The Pilgrim’s Guide, that twelfth-century account of the different pilgrim routes through France and Spain to Santiago de Compostela so carefully recorded in the Codex Calixtinus.  ‘The French Way’ was my route of choice and I knew a little of what was in store:

Galicia is well-wooded, with rivers, meadows and orchards, and the deepest clearest springs, but with few towns, farmsteads or wheat fields…  The Galicians are more like us French people than other Spanish savages, but nevertheless they can be hot-tempered and litigious…

My first trip to Galicia.  My first trip to Spain.  In the summer of 2016 delighting in Spanish culture seemed an appropriate reposte – a nod to Europe’s Catholic culture from a soon-to-be-brexited Brit.  They say the past is a foreign country, but in our increasingly uncertain and barbaric world the medieval often seems closer to the realities of modern life than the illusion of post-Enlightenment certainties.  With a historian’s joy for the past I tied a cockle shell to my rucksack and embraced the continuity of lay devotion in a world of secular change.

My travelling companions were kindly but rather odd.  They included two Lithuanian ladies one of whom I can only describe as a Lithuanian-style Wife of Bath.  Yet by far the most bizarre aspect of the pilgrimage was our first destination.  Our Ryanair plane from Stanstead flew directly to Santiago de Compostela!  Would not our medieval forebears – delighted to find that they could travel as if carried by angels – have taken the sensible option – hopped off the flight and made their way directly from airport to Cathedral to pay homage to St James?   Instead we were herded into a mini-bus which drove us through the pouring rain to our starting point – Sarria -71.6 miles or 115.2km from Santiago.  As we sped along the motorway – the entire route we would have to walk – we peered nervously out at fellow pilgrims whose throngs we would soon be joining.  Booted, caped and staffed they fended their way through driving rain.  That would be us tomorrow.  For the medieval pilgrim pilgrimage was a special kind of penance.  We were glimpsing our purgatory in advance.

Once at Sarria we walked.  From Sarria to Portomarin; Portomarin to Palas de Rei; Palas de Rei to Arzúa; Arzúa to Rúa; Rúa to Santiago de Compostela.  Five days of walking – yet a tiny fraction of ‘The French Way’.  One rather literal-minded companion saw our heavy rucksacks as a metaphor for life – our past sins weighing us down.  But I preferred another idea – that each step, each breath is a reminder that – Deo gratias – we are alive and kicking. Sometimes it was wet; sometimes dry.  The Galician countryside was strangely familiar – farmhouses looming in the early morning mist, barking dogs, cows that needed milking – trade the latter for sheep and I could have been in Wales.  We passed through villages and towns; the pretty little village of Casanova remains in the memory.  I had no problem with blisters, but after the first day of walking my pinched feet required bigger walking shoes.  These I bought the first night in Portomarin and from then on I had no further trouble – physical or mental. Perfect material for a medieval preacher?

The early morning starts were a trial.  One day our group of four fell out – that night when we reported our disagreements to a priest he warned us that it was traditional that half way through the Camino Evil would try to knock us off course.  We must remain firm in the face of adversity and not let the Devil in.  Sure enough the next day was a continuing chapter of accidents and misunderstandings.  Yet on the whole we remained cheerful. The words of the sixteenth-century Protestant John Bunyan’s, ‘To be a pilgrim’ which I had learnt long ago at a Catholic convent school, were never far from my thoughts:

Who so beset him round, with dismal stories.

Do but themselves confound, his strength the more is.

though he with giants fight,

he will make good his right to be a pilgrim.

71.6 miles or 115.2km.  Not far, but far enough with a rucksack to carry.  Mist and damp; sunshine and sparkle.  The clicking of the cockle shell against my rucksack a constant reminder of my pilgrim status.  ‘Buen Camino!’ we called enthusiastically but, alas, rather clichédly whenever we met a fellow pilgrim.  Some had started at Léon, others as far back as Pamplona.  We met sojourners from all over the world – Australians, South Africans, New Zealanders… walked with them a little while…and then lost them again over the brow of a hill.  Yet there is no way you can get lost on the Camino.  Everywhere there are signposts adorned with yellow arrows and cockle shells to tell you how many kilometres you must complete each hour, each day.  At every eating place or hostelry they gave us milky coffee in long glasses and stamped our pilgrim passports.

Galicia need its pilgrims – despite European subsidies it remains a poor part of Spain.  Yet not many I encountered walking the Camino were ‘religious’.  Many were fat – if not obese – walking slowly, encumbered with over-sized mackintoshes and grandiose – if otiose – walking poles; youths, hoping to discover the meaning of life but in reality merely procrastinating, putting off the inevitabilities of the 9-5 working week that awaited their return; the middle-aged, retelling life experiences banal to all but the teller; retirees – those who had realised life was running out and were desperately trying to find immortality in walking.  A young Dutch man didn’t want to arrive at Compostela because then his Camino would be over and he would have to decide what to do with the rest of his life.  A stoic Japanese lady of almost seventy walked fast and walked alone – a connoisseur of misty heights in her native land for whom the Camino must have seemed a doddle.

Every afternoon when we arrived at our destination, tired and thirsty, there was Mass at the local church.  I was impressed by the Spaniards – especially their priests, but not at all keen on Spanish art – so unlike Italian.  The doll-like Spanish Madonnas I found not a little disconcerting, if not macabre.  We prayed aloud for our intentions – for me there was a nephew with Downs Syndrome…and another seeking a religious vocation…  Sometimes the priest had himself been on the Camino that day, surrounded by a throng of enthusiastic Spanish school children.  Our evenings were easy – Spanish wine and hospitality: tapas, Sangria, Galician soup.  No dormitories for us – we cheated – preferring higher-class pensions.

The last day walking in to Santiago seemed the longest.  I stopped to snack and light a candle in the little church at Monte do Gozo where countless pilgrims before me have caught their first glimpse of the city of St James.  In the town I bought trinkets – postcards, rosaries, mini statues of the saint, paperweights in the shape of bejewelled bulls, as keenly as any medieval pilgrim ever acquired her relics.  At the Cathedral pilgrim office I stoutly stated that my reason for pilgrimage was ‘religious’ rather than ‘for the health’ or even ‘spiritual’ and was awarded my certificate of completion from a Dutch scribe named Peter who had come to Spain, been smitten by a señorita, stayed, and now inscribed for me:

At High Mass in the Cathedral of Santiago de Compostela I voiced my quota of ‘ohs’ and ‘ahs’ as like many a pilgrim before me I witnessed the outsized swinging thurible in action.  Compostela’s bishop presided, as severe and handsomely gloomy as any Spanish inquisitor you might imagine.  Three times I approached the tomb of St James and hugged his statue with appropriate fervour; the climax of my Camino 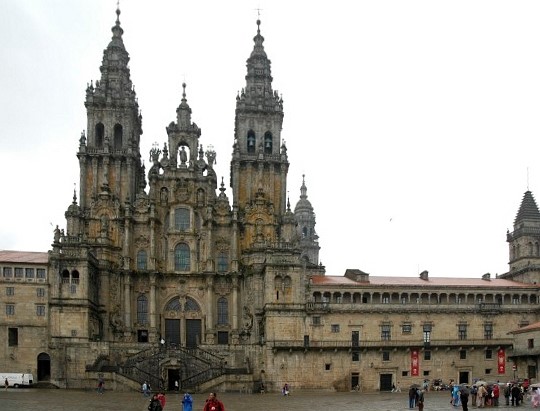 The west front of the Basílica de Santiago, Compostela, via Wikimedia 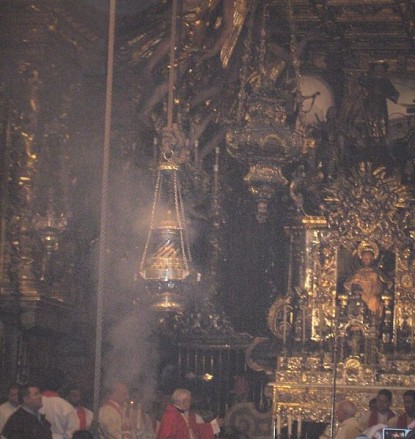 Inside the Basílica de Santiago, Compostela, via Wikimedia

What did I make of my pilgrimage?  Intense is probably the best way to describe it.  I found that I was much physically fitter than I had expected – which was nice to know after years as an archive rat. Mentally and spiritually I returned in a much better state than before I left.  At Compostela we met with compatriots who had completed ‘The English Way’.  We returned to Britain.  At Stanstead airport fresh emails pinging into my mobile announced to me that my much-loved former Ph.D. supervisor, Professor Jonathan Riley Smith, of crusader fame, had died the day I had set out on Camino.  When we assembled outside St James Church for the ‘survivors’ photograph I was still in tears, but with a renewed fervour for all things medieval. A blessing from St James perhaps? 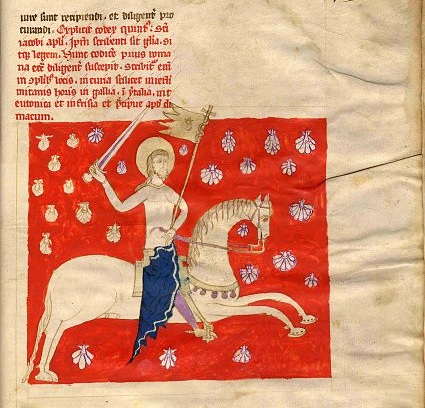 St James the Greater in the Codex Calixtinus (note the scallop shells), via Wikimedia

Dr Rebecca Rist is an Associate Professor in Medieval History in the Department of History at the University of Reading. Her research interests include medieval lay piety and devotion.

1 Response to The Long Read. Impressions of a Modern Pilgrim: Walking the Camino to Santiago de Compostela