Eight months on from its opening, in May 2016, the London-based co-living enterprise known as The Collective Old Oak is still going strong. The residential concept, situated between North Acton and Wilesden Junction, now boasts 546 residents. The project has piqued the interest of locals and the media alike. Aimed predominantly at a generation of millennials locked into the notoriously prohibitive and uninspiring rental market, The Collective seeks to change the way people live in urban centres. Residents pay rent on small private bedrooms, but gain access to a range of spaces and facilities, including kitchens, dining rooms, and lounges. There is also a communal library, cinema, sports bar, restaurant, games room, laundrette, gym, spa, and rooftop terrace, as well as regular community events. As much as anything, residents are offered a “fulfilling lifestyle” and a sense of community.

Co-living is a trend that emerged in America during the opening decade of the 21st century, starting in the “hacker mansions” of San Francisco, offering affordable accommodation to young techies drawn to the area by the various app startups taking root there. By 2013, attempts were made to formalize and expand the provision of co-living. Tom Currier dropped out of Stanford to establish a real estate startup called Campus, which purchased San Francisco property, equipped them with hot tubs and other shared facilities designed to promote a fun, but more affordable lifestyle, and then sold co-living “memberships.” Before long, co-living ventures spread to New York and other cosmopolitan centres. Campus eventually ran up too much debt and folded in 2015, but others have picked up where it left off.

The organization behind The Collective was conceived in 2010, in the LSE Library, by Reza Merchant, a student who thought it was possible to provide something other than the low quality, overpriced accommodation suffered by many young people in London. Initially providing serviced accommodation with some shared facilities on a relatively small scale, Reza made the jump to full-blown co-living provider in 2015. The Collective is now the largest complex of its type in the world. And there are plans to build more.

So is this a new utopia? Utopia 2.0 for the millennial generation, where shared spaces, Facebook groups, and synced event calendars offer a new sense of community? 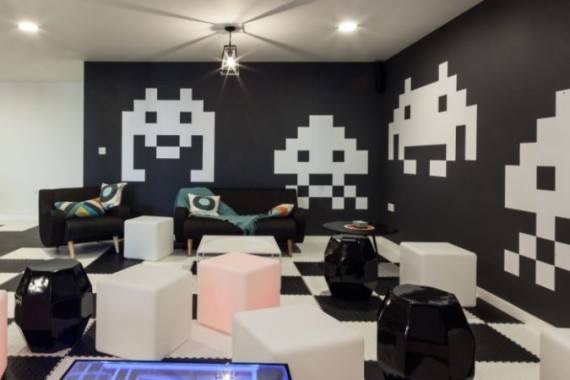 The Games Room, The Collective Old Oak. Used with permission.[2]

Certainly, co-living providers have appropriated the language of radical utopia. Residences are referred to as “the collective” or “the commune”; they provide an “intentional way of living,” a rational “design to life,” and they accent the formation of new types of “community.” This language emerged out of the visionary projects of the early utopian socialists, Henri Saint-Simon, Robert Owen, and Charles Fourier, each of whom sought to design vanguard communities that would harmonise human relations at the start of the nineteenth century. And as recent scholarly insights into utopia have revealed, we should not assume that utopian projects were divorced from reality—that “utopia” is just a pejorative term, signifying the unrealistic. Where the socialist utopias of the nineteenth century arose in response to the challenges of the nascent modern world, so co-living for millennials has emerged against a backdrop of expensive housing, crony landlords, and an impenetrable housing market.

The cooperative communities Owen established in New Lanark and New Harmony represented an attempt to mitigate the hardships of early capitalism and laissez-faire economics. Community and capitalism were harmonised, as residents formed a jointly owned venture that supported and provided for members. And while the communities themselves did not become a template for wider society, Owen’s vision of jointly owned enterprises gave rise to the hugely significant cooperative movement. As Vincent Geoghegan has noted, “the very greatest of the philosophers of the past […] used utopianism to puncture the complacency of their contemporaries.” Maybe the latest trend for co-living will help to solve the challenges of urban housing in the twenty-first century. Co-living providers are expressly targeting a generation of young professionals who want to experience city life, but feel aggrieved at the prohibitive reality of places like London and San Francisco. Those promoting co-living also cite growing concerns about a “loneliness epidemic,” as the modern world continues to limit our social interaction. Co-living promises community and shared experiences with like-minded people.

But, lest it need stating, the latest trend for co-living lacks the holistic vision of “the very greatest of […] philosophers.” Co-living borrows from a long tradition of collective designs for life, from the Owenite communities and Fourier phalanxes of the early nineteenth century, to the urban communes and constructivist housing that emerged out of the Russian Revolution, and on to the hippie groups of the 1960s. But in its current incarnation, co-living is devoid of ideology. It’s postmodern: it is, in part, a response to the problems of a modern world, but it doesn’t share modernity’s conviction that the world can be perfected. It’s not necessarily a bad thing to avoid the arrogance of some utopian thinkers; the idea that progress can be made by ripping apart the past and starting afresh prevented men such as Owen from realising the shortfalls of their visions. Yet, given the genuine challenges co-living promises to tackle, a broader perspective, and input from the municipal or government level surely wouldn’t go amiss.

And we should be aware of some potential pitfalls. One clear limitation to co-living is that there is no collective ownership or viable long-term provision. It doesn’t solve the housing problem more broadly; it offers a temporary solution for young professionals who want to enjoy urban life and partake in, as New Yorker columnist Lizzie Widdicome put it, an “extended adolescence.” And, with this, there is the danger that transient young people will tend to occupy The Collective and other such co-living ventures. This has prompted concern over the wider impact that co-living residences might have on pre-existing communities.

Will co-living prompt a different attitude or approach to housing? Will housing “experience” really become a commodity, as the latest co-living startups suggest? Time will tell.

[1] This blog is accredited to OUPblog, and ‘Co-living: Utopia 2.0?’ was first published there on 4th March 2017.  Our gratitude to them for allowing us to republish the blog piece here.