13th December 1977: In mourning and in rage – Supporting victims of rape, murder, and vulnerable women in Los Angeles

Posted on December 13, 2017 by readinghistory

In the autumn of 1977 in Los Angeles, the ‘Hillside Strangler’ began to rape and kill women by strangulation. By the end of the year, a total of twelve bodies had been found – the youngest victim was twelve years of age. Cousins Kenneth Bianchi and Angelo Buono Jr were arrested in 1978 after a final body was found in February.

Artists Suzanne Lacy and Leslie Labowitz were horrified at the media coverage of the murder victims. The coverage only began in earnest after the first three women were killed (who were working as prostitutes), when the ‘Hillside Strangler’ began to kill women from more ‘respectable’ neighbourhoods.

After viewing more media images in the newspaper of “…women, legs spread, on a hillside – a double form of exploitation…” (Labowitz), within two weeks the artists had organised a procession that took place on the 13th December 1977. 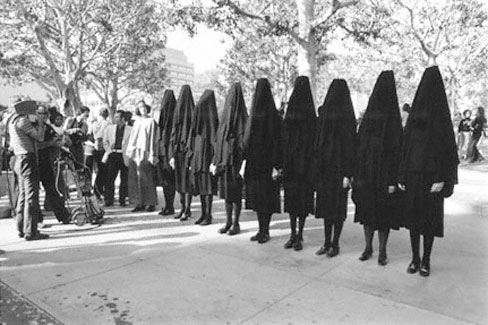 Twenty two cars, filled with seventy women dressed in black, left the Los Angeles Woman’s Building and drove to City Hall. Although an art performance, the streets reclaimed the urban space as a funeral procession would.

On arrival at City Hall, nine figures cloaked in black and one in red emerged from the cars to stand on the white steps of City Hall. Representing the ten victims of the strangler (up until that point) the women in black were raised to almost seven feet tall by their headdress and when assembled on the steps, the shape of the headdress mirrored that of the municipal skyscrapers in LA.

With other women standing behind them on the steps, holding a banner that read “In Memory of our Sisters, We Fight Back”, each woman came spoke, naming each victim and linking their deaths to larger issues around women and violence. The women in black were then draped in red – the colour associated with rage and anger. The banner was deliberately designed to fit into the horizontal frame of a camera and was a very clear attempt by the artists to carry a message, enacted for the cameras that would be carried via the media to communities across America – a very different message than the ones previously given regarding the victims and the female community of LA.

Lacy and Labowitz succeeded in their attempt to reorient media coverage of rape to what they considered to be a woman- identified perspective. Not only did media coverage change, but some of the money that had been offered by the police as a reward for the capture of the killer, was redirected back into the community – funding both self defence classes for women and the listing of rape helpline numbers in the yellow pages and across the city in various forms.

By working alongside, and in collaboration, with the police, authorities and the media (both in the organizing and staging of the event) Lacy and Labowitz drew them into a cause that could easily have been dismissed as ‘radical’. The frequently viewed architecture of City Hall – reclaimed for the day from Superman – became a physical link between the resistance to violence and public policy.

This work proved the beginning of a long term collaboration between Lacy and Labowitz, but this work (for me) is key to understanding Lacy’s aims throughout her career – framing a stage through urban architecture, that enables women to take control and have a voice for the duration of the performance, and in many cases that results in structural political and social change.

On this day in December 1977, the ten murdered women were mourned and remembered in a dignified and respectful way.