23rd December 1888: The Van Gogh story everyone wants to hear…

Posted on December 23, 2017 by readinghistory 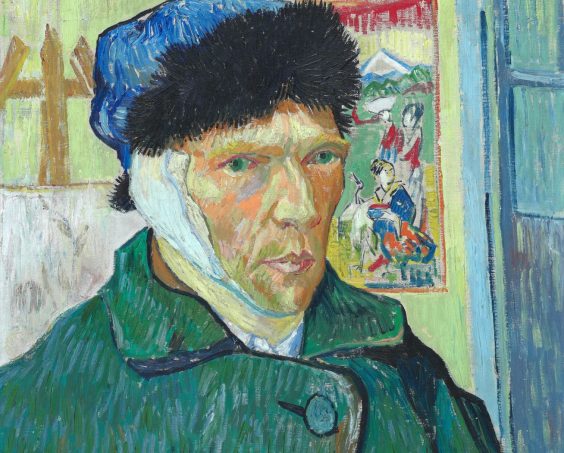 Vincent Van Gogh, Self Portrait With A Bandaged Ear, 1889

On the night before Christmas Eve in 1888 — a cold Sunday evening in the French city of Arles — Vincent Van Gogh took the razor he kept on his small dressing table and slashed off his left earlobe.

No historians or biographers can decide on one particular reason – the perpetuating trains of thought include drinking problems, an argument with fellow artist Gauguin, a desire to gain attention from his mother, simply, ‘he was mad’.

A recent book by Martin Bailey, Studio of the South: Van Gogh in Provence, suggests that a letter he received from his brother Theo on the morning of the 23rd informing him of his Theo’s engagement precipitated the incident. In a recent interview, Bailey explains “…it was fear that pulled the trigger and led to the breakdown, fear of being abandoned in both an emotional and financial way.”

He goes on to explain in more detail:

“There are other more ridiculous theories out there. I look at the facts and the news of the wedding almost certainly reached him that day,” he said.

“It’s a matter of putting all the clues together. We don’t have that letter, but in another one Van Gogh sends in January, he mentions receiving money from his brother on the 23rd of December.”

“What has escaped the attention of Van Gogh scholars is that the fiancée received a telegram of congratulations on 23 December from her older brother Henry,”

He added that Theo had written to his own mother two days earlier, and would want to share the news with his older brother to avoid him getting the information from others.

As the wound healed, the mutilated ear was a terrible disfigurement and became a constant reminder of what the painter had done to himself, and Bailey does recognise the news of the wedding was not the sole catalyst for Van Gogh’s actions that night. While his own doctors believed the artist suffered from epilepsy, recent experts have suggested absinthe poisoning, alcoholism, bipolar disorder, and sunstroke.  There is no consensus.

So, more than a hundred years later, it is still the most debated event in the famed Dutch artist’s life and overshadows the incredible body of work he produced as arguably one of the most important artists of the late C19th. But moving on from these discussions, it is time to remember a little about Van Gogh (in his own words) that begin to explore the reasons why his work is so important and we can do this by just looking at two paintings. 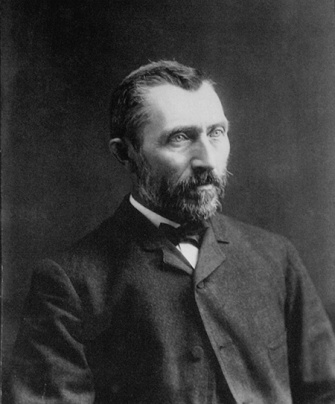 Photograph found in an antique shop in the 1990’s, thought to be of Vincent Van Gogh

Van Gogh painted over 30 self-portraits between the years 1886 and 1889 – he is one of the most prolific self-portraitists of all time. He used painting self-portraits as a method of self-introspection, an economic need of making money and for developing his skills as an artist.

“The third picture this week is a portrait of myself, almost colourless, in ashen tones against a background of pale Veronese green. I purposely bought a mirror good enough to enable me to work from my image in default of a model, because if I can manage to paint the colouring of my own head, which is not to be done without some difficulty, I shall likewise be able to paint the heads of some other good souls, men and women.” 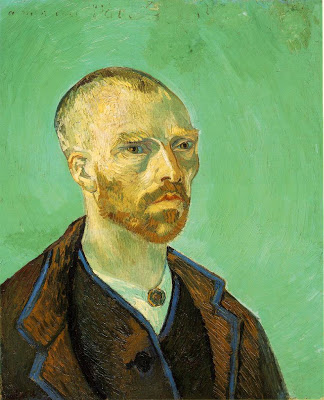 Vincent van Gogh’s sense of profound humanity continues to reverberate through both his words, and in particular his self-portraits. A hundred years ago the Expressionists (and subsequent historians) created a passionate, tortured van Gogh, whose vibrant paintings were understood as outpourings of uncontrolled emotion. Today the focus has changed as art historians and curators attempt to ‘rescue’ van Gogh from his legend by placing a new emphasis on his studio practice, the clarity of his intellect between bouts of illness and, above all, the paintings themselves. 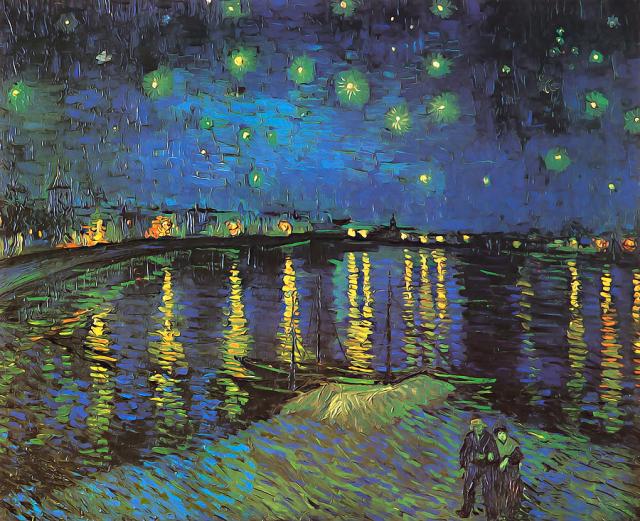 “The starry sky painted by night, actually under a gas jet. The sky is aquamarine, the water is royal blue, the ground is mauve. The town is blue and purple. The gas is yellow and the reflections are russet gold descending down to green-bronze. On the aquamarine field of the sky the Great Bear is a sparkling green and pink, whose discreet paleness contrasts with the brutal gold of the gas. Two colourful figurines of lovers in the foreground.”

Van Gogh’s inclusion of the Great Bear constellation in Starry Night Over the Rhone and the attention he gives to staying “true to nature,” (through his understanding and use of colour) deserves consideration. Van Gogh is often stereotyped as a painter more concerned with documenting subjective subject matter, but his scientific documentation of the constellation of stars in the Rhone painting shows the artist as one interested in portraying natural landscapes “as they are.”

So yes, this blog does commemorate the date on which Van Gogh, for whatever reason, began to enter into a very serious bout of depression and act of self mutilation. But with regards to use of colour, self portraits and producing landscapes, I suggest he is clearly one of the foremost artists of the past 150 years. And this is what needs to be remembered about Vincent Van Gogh.

1 Response to 23rd December 1888: The Van Gogh story everyone wants to hear…