Posted on December 20, 2018 by readinghistory 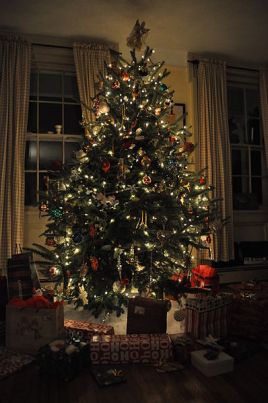 Christmas evokes a sense of nostalgia in many of us, as a holiday wrapped up in tradition, family, and the home. Through my research into the diaries of teenage girls from the 1970s, 80s and 90s, I have stumbled across many years’ worth of Christmas reflections from teenagers across the country. Most of their diaries were kept between the ages of 13 and 18, charting their growth from awkward pre-teens to young adults about to leave the security of their familial homes. Christmas and New Year’s entries allow us to glimpse the experiences of a few families in this era, and reveal how girls navigated their familial expectations and busy social lives.

Diary entries on Christmas Day were usually brief, as socialising, games, and present-opening were prioritised, but were followed up on Boxing Day with lists of gifts and highlights of the day. Christmas Day itself was always spent in the home. Grandparents often lived nearby, and joined in for dinner, and the day was punctuated by visiting neighbours or family friends stopping by to exchange gifts and cards. The diarists often helped their mothers with the domestic labour, making desserts or cooking the dinner, but at times this led to conflict, such as one girls’ frustration with her brother and father’s lack of initiative after her mother fell ill over Christmas in 1988:

[my brother] does bugger all, grandma helped but left in the morning, dad sits & orders everyone else around. It’s me that gets on and arranges & does all the jobs, but no-one appreciates it.1

Another diarist also found herself frustrated after entertaining guests on Christmas Day 1980, writing that things were ‘a bit strained. Unxmassy.’2 Taking on an uneven share of the domestic responsibilities often left girls feeling less than festive; generational rifts were also evident in girls’ engagement with religious traditions. Family visits to church for carol services or midnight mass were recorded with a sense of bafflement or mild irritation:

Went to Baptist for carol service – a man behind me wasn’t half tone deaf – when we sang high he sang low.3 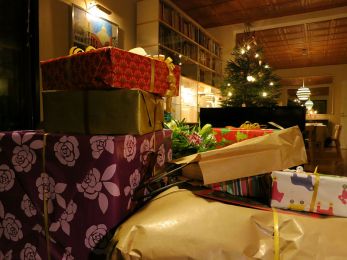 Church-based activities enforced by parents apparently failed to conjure any festive feeling in these teenage diarists. Any lost Christmas spirit was rediscovered when it came to opening presents, however. Girls meticulously recorded their annual haul, and who the gifts were from, perhaps to later write thank-you notes to relatives and friends. Current fashions, collectables, make-up, and music records featured heavily on most Christmas gift inventories, reflecting trends in teen culture at the time. For example, one such list written by a music enthusiast in 1997 included a Stone Roses cassette and concert VHS, corduroy trousers, a velvet jacket, and Doc Marten boots; the epitome of a 90s indie girl.

The diaries suggest, then, that Christmas, whilst often recorded as being a joyous occasion in which girls gained materially, could also be socially perilous. Relationships could become strained as girls were expected to conform to established family traditions and responsibilities in the home. It is perhaps unsurprising, then, that when the opportunity was presented, girls leapt at the chance to don their newest outfits, escape the confines of the home, and meet friends for a night of drinking, dancing, and potential romance, or ‘cuddling boys’ as one diarist recalled in 1981. Diary entries were usually sparse on the details of such parties, perhaps to protect any juicy details from the prying eyes of siblings or parents, save for the odd scrawled summary, one 15-year-old apologising to her diary for getting ‘pissed’ on New Year’s Eve.

Once the hangover fog had cleared, girls also reflected on the year gone by. New Year’s Resolutions from across these years yield some intriguing changes over time. Diarists from across the 1980s and early 1990s tended to focus on self-improvement; weight loss, fitness, and cultivating more traditionally feminine or ‘girly’ attributes were high priorities for the year ahead. However, one diary from the late 1990s offers alternative aims, instead focusing on improving her grades, being nicer to her friends, and improving her musical skills on the guitar and piano, suggesting a shift in this era in those personal attributes which girls valued.5

Image by OuroborusA, shared under a CC-BY-NC-ND 3.0 license.

Girls often wrote to their diary like a friend, personifying the diary as an imaginary confidante by giving it a name, or greeting and signing off their diary like a letter. Christmas and New Year meant that it was time for a new diary, often gifted on Christmas Day itself, with one diarist remarking, ‘Isn’t this new cover of yours ace?’.6 With the commencing of a fresh diary, the teenage diarists expressed their hopes for the year ahead and looked to the future and their impending adulthood:

Another year gone by and I’m getting nearer and nearer to being a grown-up […] when you grow older you have to stand up on your own two feet and I, who have always been rather a sheltered child, and enjoyed it, will have to realise that the world if not as friendly as it seems […] Goodbye 1975 and hello 1976 and let’s hope it’s a good one. I feel this world deserves a Happy New Year.7

Footnotes
All references are to the Great Diary Project at Bishopsgate Library, London. I am very grateful to the library and its staff for supporting my research.