Battleaxes and Benchwarmers’ Trip to Parliament 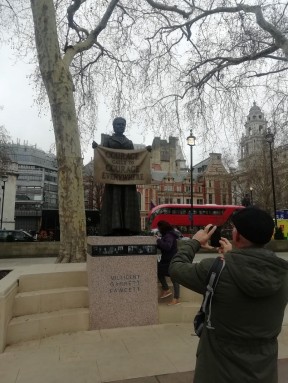 The statue of Millicent Fawcett.

On Tuesday 12th March 2019, a group of final year History students at the University of Reading took a trip to Parliament. This trip was undertaken by students enrolled on the Battleaxes and Benchwarmers’: Early Female MPs 1919-1931 module, led by Dr Jacqui Turner.

After an eventful and amusing 8am start to the day, we finally arrived in London, slightly behind schedule, but excited for the day ahead. En route to the Palace of Westminster, home to the British Houses of Parliament, we passed the statue commemorating the life and work of Millicent Fawcett, in Parliament Square. The statue was created by the artist and Turner Prize Winner, Gillian Wearing, and was unveiled in 2018.

We entered through Portcullis House, home to the offices for Members of Parliament, and were greeted by two interns for Rachel Reeves, Labour MP for Leeds West, and our lecturer, Dr Jacqui Turner. We then embarked on a tour of the Houses of Parliament and the Palace of Westminster. Our enthusiastic tour guide gave us much detail and pointed out many aspects of Parliament relating to female MPs and suffrage, and explained parliamentary etiquette and how the House of Lords and House of Commons are structured.

Once our tour was complete, we witnessed the Speakers’ procession into the House of Commons, and then picked up tickets for the Strangers’ Gallery, where we spent an hour watching the House of Commons in action. We attempted to pass information back and forth down our row in whispers, but it ended up more like a failed ‘Chinese whispers’, causing a giggle afterwards when we discovered the true information. Our time in the Strangers’ Gallery was really ‘eye opening’; we gained a better understanding of how the House of Commons works, and we were able to listen to some of the debate on the Brexit ‘Withdrawal Agreement’. I think, as a group, we all really enjoyed being able to understand better – drawing on what we had learned in our lectures on the structure of parliament – as it was played out in front of our eyes. 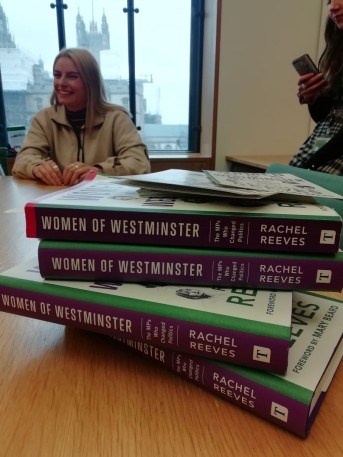 We then left the Strangers’ Gallery and took a trip to the café for some much-needed lunch. From here we made our way back to Portcullis House, where we met with Rachel Reeves MP. Rachel gave us a candid discussion of her new book Women of Westminster: The MPs Who Changed Politics, published on the 8th March 2019. She read snippets from her book and talked to us about the early female Members of Parliament, the difficulties they faced, and how they overcame these. Rachel emphasized the separate gendered spaces and the practicalities of Parliament in relation to women entering as Members of Parliament from 1919 onwards. We also discussed the clothing of female MPs and the scrutiny these women faced and still, to some extent, do face. Additionally, we touched on issues of sexual harassment and objectification of women in Parliament, and how female MPs changed the debates, issues, and culture of Parliament. Rachel also highlighted the legacy of female MPs and the sacrifices they made, and how female MPs owe something to the generation of women who came before them. 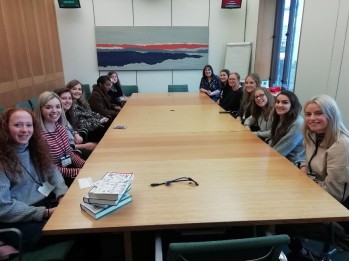 As a group, we were then given the opportunity to ask Rachel some questions. When asked ‘What more do you want for women?’, she addressed issues of the gender pay gap, distribution of income, the lack of a female Labour Party leader, and women in high-up positions in Parliament. When asked ‘What are you most proud of as a female MP?’, she detailed work with opposition parties, cross-party politics and her involvement, as co-chairperson, with the Jo Cox Commission of Loneliness, launched in January 2017. Rachel also described how her book brings her pride, as it tells the story of early female MPs and explores women’s political history. It was truly inspiring and informative to meet with Rachel Reeves, and we all left the room feeling even more passionate about women’s history.

Visiting Parliament was a new way to appreciate the role of female MPs, and to be in the same buildings and hallways they would’ve been in felt really special. The unique opportunity of meeting and talking to Labour MP Rachel Reeves was such a valuable experience to be able to understand her perspective and learn more about the work she does. 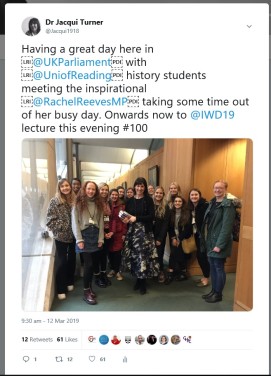 Once we had finished our meeting and question time with Rachel Reeves MP, a smaller group of us undertook another mini-tour of the Palace of Westminster, led by Jacqui. We ventured up to the Committee Corridor to see the portrait relief of Nancy Astor by Michael Rizzello, which was presented to the House of Commons in 1996 by the Astor family. The relief of Nancy Astor is now on permanent display on the Committee Corridor in the House of Commons, accompanied by a new leaflet created by Jacqui and the Vote100 project.

After another café break, a trip to the gift shop, and some deep discussion around the topic of women in parliament, we returned to Portcullis House in time for the International Women’s Day 2019 lecture – ‘Nancy Astor: First Steps Towards A Better Balanced World’ – presented by ‘our own’ lecturer, Jacqui. The lecture was introduced by Luke Pollard, Labour MP for Plymouth Sutton and Devonport. This is the same constituency that Nancy Astor, the first female Member of Parliament, was elected to in November 1919 in a by-election for the Conservative Party. This lecture was attended by members of Nancy Astor’s family and the Lady Astor Statue Appeal.

Visiting Parliament was a fantastic opportunity to learn more about women in politics. Jacqui’s lecture on Nancy Astor was inspiring, topping off a really great day in London.

Jacqui’s lecture on Nancy Astor and her discussion of the history and legacy of the first female MP in Parliament was full of passion, and a great way to spend an evening after a wonderful and insightful day at Parliament. Following this lecture, we returned to the coach and travelled back to Reading for a night’s sleep – before our 9am lecture with Jacqui the following morning. 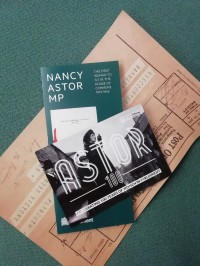 Materials from the Astor100 campaign. 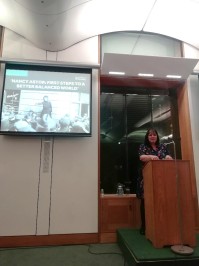 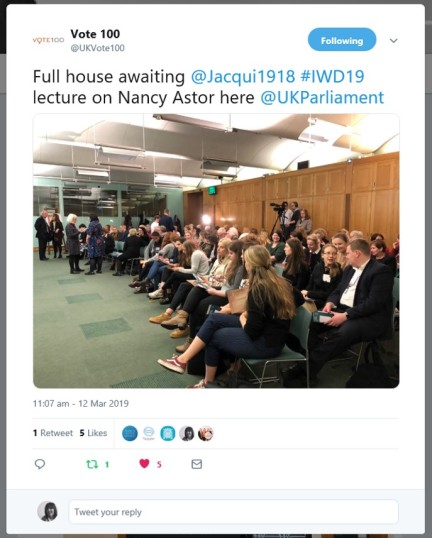 An eager audience at the International Women’s Day 2019 lecture in Parliament.

I am sure I speak for everyone, when I say that we had an amazing visit to Parliament and we are all very grateful to Jacqui for spending her time organising it, and for her continued energy and enthusiasm for informing us about women’s history and specifically about early female MPs from 1919-1945. 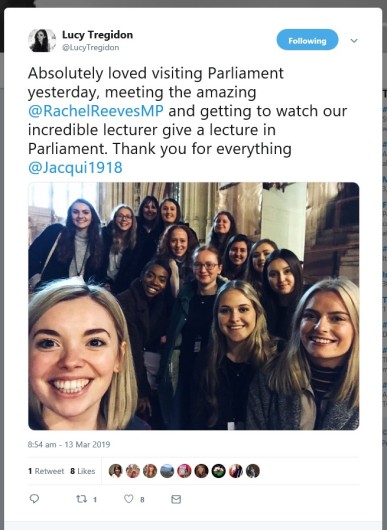 The trip gets an enthusiastic review from History student Lucy Tregidon on Twitter.