Almanacs, Astrology and the Origins of Weather Forecasting

Posted on November 19, 2014 by readinghistory 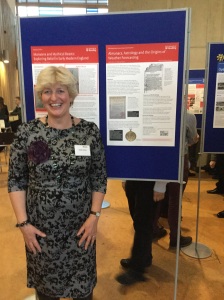 My name is Aoife Lintin, and I am studying History at the University of Reading. My tutor is Dr Anne Lawrence, a medieval historian specialising in the history of magic. Dr Lawrence is at present studying the history of weather forecasting.
The purpose of my UROP project is to study almanacs. Almanacs were, amongst other things, the forerunners of the modern pocket diary, containing all sorts of useful information for the ordinary individual and household. These included an accurate calendar, dates for the full moon and lists of important dates and individuals, such as the kings and queens of England. They also made predictions for the weather and events of both political and national importance. They were important to the ordinary individual in the past as the calendar is to us today, and are in fact still published today. 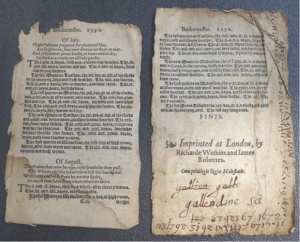 Leaves from a fragment of an almanac and prognostication by Thomas Buckminster (London,1590) RESERVE–528.2-BUC, University of Reading Special Collections.

The compilers of almanacs were scientific people who believed that as ‘the moon affects the tides then the planets must have an effect on the weather’. They used mathematics to work out the position of the stars and the planets and work out weather predictions from these. As the movements of the planets and stars can be predicted, the weather was predicted for a whole year from the previous autumn, thus using astrology to foretell the weather. The heavens were divided into the signs of the zodiac, and it was these that were used for the predictions. Scientifically this theory has lost credibility. It is true that the moon has an effect on the tides, but the theory that a distant planet like Saturn can have on effect on the weather has come into question. Today, meteorologists do not consider this form of weather forecasting to be valid. 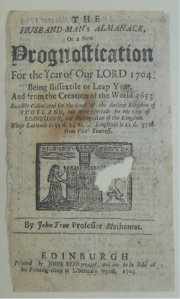 Fragment of ‘The husband-man’s almanac, or a new prognostication for … 1704′ by John True (Edinburgh, 1704) from the John Lewis Printing Collection, University of Reading Special Collections.

My UROP project is to study and make a catalogue of almanacs in different departments of the University. Many have not been catalogued or studied before. It was thought that weather forecasting or meteorology started in the nineteenth century, but this project proves that it started a lot earlier and it has been recorded as a practice as early as in the mid-sixteenth century.
The research part includes a short study of duty charged on almanacs. This was made law in the reign of Queen Anne in 1712, and must have been very lucrative, as there was a ten pound fine for non-payment, a lot of money at this time. It was the refusal of the American colonies to pay duty on printed material, especially legal documents, that started the move to American independence. ‘No taxation without representation’, was their famous cry. This shows the importance of the duty tax at this time.
The University’s rare book collections contain a bound volume of almanacs for the year 1807 ([Album of almanacs]. 1807 – RESERVE–529.5-ALB), and it is interesting to note that they give the same weather symbols and predictions for the weather for three of them. We know that weather forecasting is not an exact science. Was there a table for working out weather patterns? Or does this prove that compilers had a system that was universally accepted? It would be interesting to find out if the weather for 1807 agreed with these predictions.

1 Response to Almanacs, Astrology and the Origins of Weather Forecasting