Toads mean Trouble: Amphibious Assassins in Gerald of Wales’ The Journey through Wales

Posted on October 31, 2016 by readinghistory

If you were asked to think of an unassuming British animal, I would hazard a guess that the first creature to come to mind would be something – small, brown, possibly squeaky – like a mouse or hedgehog.  So unassuming is the toad that I bet you’d not have even given it a second thought (if it wasn’t for the title of this post).  Yet whilst we might think of toads as little more than ‘dry frogs’ (a phrase I once heard a five year old use to describe them with some accuracy) our medieval counterparts were much more wary of these pesky polliwogs.[1] 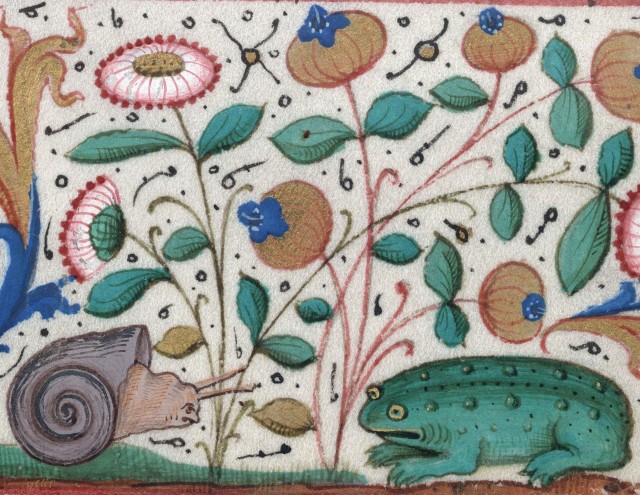 Medieval bestiaries grouped amphibians with reptiles which, whilst now known to be incorrect, is perhaps not such a surprising association to have made considering outwards appearances.  Like many other ‘reptiles’, toads were seen to be dangerous, in fact the German abbess Hildegard of Bingen (d.1179) warned in Physica that: ‘just as dangerous winds come forth with lightning and thunder and hail, [the toad] has some diabolical art in it.’[3]  Indeed, if a cat were to lick a toad or serpent then the cat would become ‘harmful and poisonous’ to people; although with seemingly little issue for the cat itself (maybe due to their nine lives!).[4]  For those that are becoming concerned over the prospect of amphibious encounters it is worth noting that Hildegard highlighted that frogs were, at least, less dangerous than toads because they were ‘cold and a bit watery’, which clearly had a detrimental effect on their powers.[5]

Discovering why toads had such a bad reputation is harder, there is little direct mention of toads in the bestiaries, nor in their forebears; and this lack of reference to toads, and reptiles in general, in Classical anthological sources has not gone unnoticed.[6]  However, whatever the cause, it is clear that toads were considered to be dangerously poisonous.

But how poisonous were toads?  In the Life and Miracles of St William of Norwich one account highlights the dangers of their poison.[8] This miracle account involes Wimarc, a woman imprisoned at Gainsborough during Stephen’s reign (1135-54).  Wimarc, along with other prisoners had to endure ‘miserab[le] cold, hunger, stench and attacks of toads’ so in order to secure their freedom they decided to poison the gaoler: ‘they took a toad (of which, as I said, there were many in the prison) and mixed its poison with the drink…and invited the gaoler to drink it’.[9]  However, the suspicious gaoler was less than willing to accept a drink from his captives (funny that!) and requested they drank first.  Seeing their hesitation and fear he knew not to trust the offering and the gaoler forced them to drink instead:

Immediately the venom crept through the limbs of each, and all of them swelled up in so wonderful and horrid a manner that any man who saw them would be convinced that their skin must burst…The poison saturated them through and through and the life was brought to the doors of death.[10]

Only Wimarc survived and, having been released, she suffered for seven years from a ‘monstrous swelling’ which no doctor could cure.[11]  Turning to the saints she eventually came to St William’s tomb in Norwich Cathedral where, after a few days, she kissed the tomb and ‘vomited all that poisonous discharge on the pavement…it was horrible – no, unbearable, that there was enough of it to fill a vessel of the largest size, that the bystanders were so constrained to leave the place, and the sacrists to cleanse the spot and strew it with fragrant herbs’.[12]  Wimarc, however, now appeared completely cured from her swelling, as if she had never been poisoned and, after giving thanks, returned home.

Another account of toad-based poisoning can be found in the Peterborough Chronicle which refers to torturers using reptiles and amphibians.[14]  Clearly toads are dangerously venomous and we must learn to be a lot more wary of them (or be prepared to undertake a journey to Norwich to the boy-martyr St William for some help).

But why, in the title, did I refer specifically to Gerald of Wales’ The Journey through Wales?[15]  Well, Gerald’s account reveals another terrifying aspect of toads: not only are they poisonous but they also have a habit of stalking their victims (not so unassuming now are they?!).

In his memoir of travelling around Wales with Archbishop Baldwin of Canterbury in 1188 (to rouse would-be crusaders to take the cross for the Third Crusade) Gerald records many fanciful tales of animals, including self-castrating beavers and tricksy weasels.  However no animal comes across more terrifying than the toads of Cemais (now in Pembrokshire) who stalked, and eventually devoured, a young man from the neighbourhood:[16]

In our own days a young man who lived in this neighbourhood, who was lying ill in bed, was persecuted by a plague of toads.  It seemed as if the entire local population of toads had made an agreement to go to visit him.  Vast numbers were killed by his friends and by those looking after him, but they grew again like the heads of the Hydra.  Toads came flocking from all directions, more and more of them, until no one could count them.  In the end they young man’s friends and the other people who were trying to help were quite worn out.  They chose a tall tree, cut off all its branches and removed all its leaves.  Then they hoisted him up to the top in a bag.  He was still not safe from his venomous assailants.  The toads crawled up the tree looking for him.  They killed him and ate him right up, leaving nothing but his skeleton.[17]

No reason is given for why this unfortunate youth should have been targeted by the toads, perhaps they took a disliking to him following some unrecorded insult, or perhaps toads are just so menacing a foe that they need no rational to support their decisions.  Either way, Gerald makes it clear that toads are determined and single-minded in their decisions; when they chose to stalk they’ll do it to the death and not even trees or beheading will stand in their way.  But, on a plus side (if one can be found) these Welsh toads do not use their natural poison, although Gerald does refer to them as ‘venomous assassins’, so at least the poor chap from Cemais is spared the pain suffered by Wimarc before his demise.[18]  However, let’s be honest, neither fate is appealing and the message is clear – avoid toads at all costs!

So next time you come across a toad, you might just want to reconsider becoming acquainted, and if you do decide to go ahead and greet that assisinous amphibian be prepared for the consequences that will (undoubtedly) follow.

The Common Toad (Bufo bufo) is found across Europe.[19]

This is a revised blog post of one originally written for Ego Sum, Ego Google, 23rd August 2014.

[9] The Life and Miracles of St. William of Norwich. 6.xiii

[10] The Life and Miracles of St. William of Norwich. 6.xiii

[11] The Life and Miracles of St. William of Norwich. 6.xiii

[12] The Life and Miracles of St. William of Norwich. 6.xiii

2 Responses to Toads mean Trouble: Amphibious Assassins in Gerald of Wales’ The Journey through Wales