Posted on March 1, 2017 by readinghistory 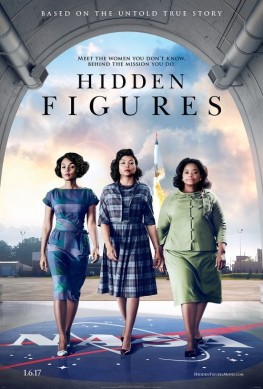 There was some confusion at the Academy Awards this weekend when ‘La La Land’ was incorrectly announced as the winner of the Best Picture Oscar, the real winner being ‘Moonlight’.  Away from this embarrassing mix-up another Best Picture nomination has been released into UK cinemas and that film is the absolutely phenomenal ‘Hidden Figures’. It is directed by Theodore Melfi and is based upon the book of the same name by Margot Lee Shetterly. The tale of ‘Hidden Figures’ focuses on three African-American women who helped to win the space race for America. The three women’s incredible stories are intertwined with each other in this true story. Each of the three women in question broke countless social boundaries in order to pursue their dreams. These women’s names were Dorothy Vaughan, Mary Jackson and Katherine Goble Johnson, played by Octavia Spencer (who absolutely deserves the Best Supporting Actress nomination that she got for this film, by the way), Janelle Monáe and Taraji P. Henson respectively.

I cannot believe that before I found out that this film was in development that I had never heard of these awesome women before. Each of them had contributed to the achievement of winning the space race more than I ever could have realised. All three women worked at so-called ‘computers’, mathematicians that calculated for NASA. Mary Jackson won a court case in order to attend a segregated school and take the classes she needed to become the first black female engineer, Dorothy Vaughan helped to programme the NASA supercomputers by learning about FORTRAN programming and Katherine Goble Johnson calculated trajectories for space flight at the highest level of the space task force.

Dorothy Vaughan (Octavia Spencer, centre) determinedly leads the women – referred to as ‘colored computers’ at the time – in the film to the supercomputers

The stories told in this film were absolutely incredible. The amount of prejudice, both racial and gender-based, that these women came up against was so large and there is a particularly poignant scene in the film where Katherine, as the only black woman working in the space task force, lets out her frustrations about having to run across the NASA campus to the bathroom because segregation decrees that she cannot use the bathroom in the building where she works. Katherine Goble Johnson’s story is the most central in this film and her story is one that should have been told a long time ago. Henson, Monáe and Spencer really carry this film and give such outstanding performances. I also liked Kevin Costner in this film. I thought he did a great job in his role, but I found Jim Parsons rather underwhelming as head engineer Paul Stafford, even though talking about science is something you’d think that he would be good at considering that he is paid $1 million per episode for a show about science outside this film. Maybe it’s just me. 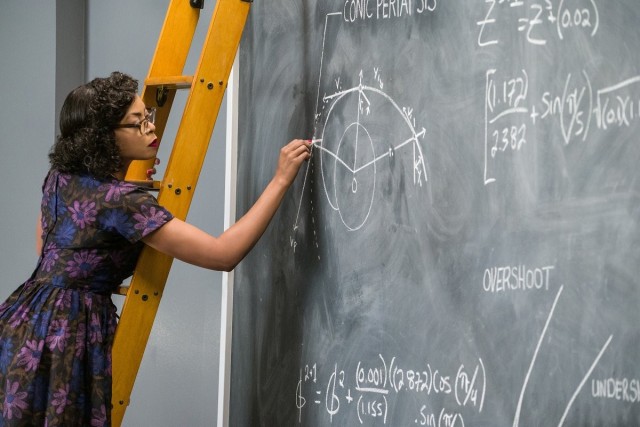 Henson’s Katherine Goble Johnson does some calculations for her colleagues

I loved this film. You can tell that the people that made this film poured their heart and soul into this film and it strikes a chord in you emotionally watching these women climb their way up, closer and closer to the recognition that they deserve for their contributions to space travel. It’s a very likable film, with an excellent soundtrack to compliment it by Hans Zimmer and Pharrell Williams and stellar performances throughout the cast. ‘Hidden Figures’ is moving, feel-good and empowering, and I’d recommend making the trip to the cinema to experience it yourself.

[1] You can read more film reviews by Philippa her blog, ‘Movie Reviews with Philippa’