Posted on February 14, 2018 by readinghistory

In April 1988 the New York Times published a review of Suzanne Schiffman and Paméla Berger’s film Sorceress (French version Le Moine et la Sorcière), which debuted at the 68th Street Playhouse. It described it as ‘a parable about the clash between a dedicated healer and a dedicated pursuer of heretics, over whether God prefers to tend man’s body or scourge his soul’.  The film tells the story of a thirteenth-century Dominican who, deployed to seek out heretics, arrives in a small French village where he discovers a mysterious lady who performs healing rites. Although it received mixed reviews, the psychological exploration of trauma, secrecy, control and oppression, feminist ideas of patriarchy, childbirth and sexual violence, and moral themes of pride, lust, corruption, spiritual blindness, celibacy, virginity, and forgiveness, make it intriguing watching.

As a medievalist I was delighted to discover that the film was not only based on an original manuscript, like the famous film Le Retour de Martin Guerre (1982), but a retelling of the medieval legend of St Guinefort, the Holy Greyhound. Throughout its two thousand year history, Christianity has honoured animals as part of God’s creation. In hagiographies they are the friends of saints with whom they are depicted: John the Baptist and St Agnes with a lamb, St Bernard of Clairvaux and St Roch with dogs, St Antony of Egypt with a wolf; St Eustace with a stag. Saints care for animals: St Anthony pigs, St Bridgid cows, St Cuthbert eider ducks, St Jerome a lion. St Antony of Padua preached to the fishes, St Francis of Assisi to the birds. Animals are divine symbols: Jesus is the Lamb of God, the dove is the symbol of the Holy Spirit, the lion represents courage, the dog loyalty.

St Francis of Assisi preaching to the birds via Pinterest

Yet although animals were often associated with popular saints’ cults, the medieval Church did not approve of the veneration of animals. Circa 1261 the inquisitor Stephen of Bourbon visited an area of south-eastern France known as the Dombes, and there found that women were venerating a St Guinefort as a healer of children. He was extremely pleased, until he discovered that St Guinefort was not a holy man, but a greyhound.

According to Stephen’s account recorded in his book On the Seven Gifts of the Holy Spirit, this greyhound had saved the life of the baby of the lord of the castle who was attacked by a snake, but the lord, mistakenly believing the hound had tried to harm his child, killed it in anger. Subsequently, having discovered the baby safe and the serpent dead, he deeply regretted his actions. A cult grew up where the hound was buried and women brought their sick children to the site. It is likely the dog’s name was derived from a certain Saint Guinefort who had died a martyr at Pavia where his cult was established and spread to France. We know that stories of a dog saving a baby’s life are found in many places and periods from the ancient to the modern: Pausanias in the second century AD; the thirteenth-century Welsh story of the faithful Gelert; the fourteenth-century The Seven Sages of Rome, a popular collection of moral stories or exempla; the Disney classic Lady and the Tramp (1955).

Stephen visited the cult’s location where he disinterred and burnt the greyhound’s remains. The Church’s disapproval of animal saints was philosophical and stemmed back to Ancient and Patristic ideas, developed by St Thomas Aquinas, Stephen’s contemporary, that since they were not rational beings with the capacity to make moral choices, they could not actively choose good over evil.

This was not the only reason for Stephen’s dismay. Something more sinister appeared to be afoot:

When they [the women with sick children] arrived, they would make offerings of salt and other things; … they would pass the naked babies between the trunks of two trees the mother, on one side, held the baby and threw it nine times to the old woman, who was on the other side. Invoking the demons, they called upon the fauns [fairies] in the forest of Rimite to take the sick, feeble child which, they said, was theirs, and to return their child that the fauns had taken away, fat and well, safe and sound. Having done this, the infanticidal mothers took their children and laid them naked at the foot of the tree on straw from the cradle; then, using the light they had brought with them, they lit two candles, each an inch long, one on each side of  the child’s head and fixed them in – the trunk above it. Then they withdrew…so as not to see the child or hear him crying...

On the Seven Gifts of the Holy Spirit is written by a man, and so perhaps should not be trusted to give accurate information about a female rite. Besides clerical misogyny, we may be wary because the story is written by an inquisitor aiming to assert orthodox Christian theology. Yet the book is not only a theological commentary; it is also a compilation of supposedly edifying real-life anecdotes for preachers to use in their sermons. Furthermore, the idea of passing sick children through holes of trees believed to possess magical and healing powers is well attested in Celtic lore and was found in Sweden as late as the 1930s.

According to Stephen the rite was suspect on a number of counts. First, it is idolatrous – divine honour is being shown to an animal. Second, the women are involved in divination (the casting of lots to know God’s plans in advance), a practice condemned by the medieval Church. Third, they are engaging with natural elements associated with witchcraft (elder trees and anthills) instead of with the Church’s sanctioned vehicles of Grace – the Sacraments. Fourth, they are a mockery of true pilgrimage and veneration of the canonical saints. 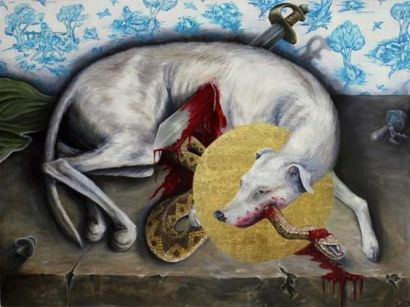 This all seems relatively standard medieval condemnation of unorthodox and un-sanctioned worship. Yet, we are also presented with a description of sick and feeble children. The ritual appears to play on fears that a child might be taken following birth and a changeling substituted. This would be a particular concern if the baby was still unbaptized, since medieval people believed its immortal soul would be in danger.

The mothers of the Dombes may have hoped that if a sick child did not recover, its exposure would lead to death. Changelings were a way a community could explain sickness and abnormality and dispose of the burden of raising an ailing child. At a time when the growth of the practice of confession was encouraging the idea of individual guilt, it allowed mothers to relieve their consciences.

There are other curious elements to the story:

One woman… was withdrawing from the scene when she saw a wolf come out of the forest towards the baby. If maternal love had not made her feel pity and go back for him, the wolf, or as she put it, the devil in the shape of a wolf, would have devoured the baby.

Just as the ‘fauns’ appear as demons, so the wolf appears as the devil. A modern psychologist might say the wolf symbolises the mother’s own aggressive nature and wish to abandon her sickly child.

There is also a reminder of the medieval trials by water and fire:

When a mother returned to her child and found it still alive, she carried it out into the fast-flowing waters of a nearby river,…and plunged it in nine times; if it came through without dying on the spot, or shortly afterwards, it had a very strong constitution.

In the trial by water, if a woman floated she was a witch, but if she sank was not; in the trial by fire if her hand healed she was guilty but if there were burns, innocent; here also we see an ‘all or nothing’ logic; if the baby resists the cold of the river, it is the woman’s child; if it cannot it is a changeling.

The ritual reminds us too of the rite of baptism, which, acting as a defence against the Devil, was believed to be a potent form of protection against changelings. It includes the key symbolic elements of baptism: salt, fire and water, and the practice of triple immersion. Baptisms were conducted immediately after birth to prevent children dying unbaptized. The ritual was therefore not meant to stand in place of baptism but, by replicating aspects of the baptismal rite, reawaken its effects.

Possibly Stephen believed that the ultimate aim of this post-birth birth control was to kill unwanted children. The medieval Church was unwavering in its condemnation of infanticide. Yet Stephen chose to shut the rite down, rather than imposing more severe penalties, suggesting that he did not regard the cult as ritual infanticide. The Church’s censure of the rite of St Guinefort was not just a ban on a non-orthodox cult, nor merely a theological statement that animals could not be saints, nor only a crackdown on magical and heretical practices, but also the condemnation of a healing cult which had got badly out of hand. The legend of St Guinefort the Holy Greyhound reveals the Church struggling to balance popular piety with religious dogma. In this respect it is not so different from the Church today.

Dr Rebecca Rist is Associate Professor in Medieval History and Director of the Graduate Centre for Medieval Studies at the University of Reading. She is currently writing an article on ‘The Papacy, Inquisition and St Guinefort the Holy Greyhound’ for the peer-reviewed journal Reinardus: https://benjamins.com/#catalog/journals/rein/main

1 Response to The Long Read: Saint Guinefort the Holy Greyhound